The masterpiece graphic microcode behind the Nintendo 64 version of Indiana Jones and the Infernal Machine and Star Wars Episode I: Battle for Naboo

Factor 5 used to be one of the best game development studio at the very end of the 90’s/early 2000’s. Its programmers, coming from the German hacking and demo scene, were very talented and, thanks to a collaboration with both Nintendo and LucasArts, were able to deliver stunning graphic achievements on the N64 and GameCube. (https://en.wikipedia.org/wiki/Factor_5)

After the success of the Star Wars: Rogue Squadron in 1998, Factor 5 started to work two new games, Indiana Jones and the Infernal Machine and Star Wars Episode I: Battle for Naboo, with the intention to squeeze the Nintendo 64 to its best. In order to do so, Factor 5 decided to develop a “new” graphic microcode (and optimize its audio microcode called Musyx). (https://www.ign.com/articles/2000/11/10/bringing-indy-to-n64) (https://www.ign.com/articles/2000/11/11/interview-battling-the-n64)

At the very end of the commercial life of the N64, both games were released, too late to attract the favor of the critics and a public already focused on the next generation of consoles, meaning the technical achievements injected of those games went unfortunately unnoticed.

GlideN64, as its predecessor Glide64, has mainly been developed as a High Level Emulation (HLE) plugin. A microcode is a library of high level macro commands (high level in compare with processor op-codes). LLE way is to run these commands as actual hardware would do, instruction by instruction. HLE implements what commands in that library do as fast as possible without running actual command’s code.

As explained by Sergey in his blog few years ago (http://gliden64.blogspot.com/2014/11/a-word-for-hle.html), few games could not be emulated graphically in HLE as the documentation necessary to do so was unavailable. Yet few years ago Sergey and I started on reverse engineering and implementing customs graphic microcodes.

When we started our journey to decipher the one used by Indiana Jones and the Infernal Machine and Star Wars Episode I: Battle for Naboo, we could only be impressed on how well written and optimized it was and though we are unable to understand its intricacy in details, we do believe that its prowess deserves to be documented for the posterity.

On the contrary of what could be suggested by Factor5, the graphic microcode of both Indiana Jones and Battle of Naboo was NOT developed from scratch. It was obviously developed with the source code of the F3DEX microcode supplied by Nintendo in its SDK, which is just an optimized version of the Fast3D microcode used by Super Mario 64. Of course most of the graphic commands were rewritten along with many major additions (the size of the microcode is about twice as large as the other ones) but its core is quite similar with the very first game of the console.

What remains mainly is the way to transform input vertices into a specific output data structure stored into a buffer within Data Memory (DMEM) of the RSP (Reality Signal Processor). Those structures may be then selected by a triangle command, formatted into a low level triangle command and then used by the Reality Display Processor (RDP). The code used in this respect is comparable to the code used in the F3DEX microcode where there is no correspondence with the code of other types of microcode (Turbo3D, ZSort) to do such an operation.

Another evidence in this respect is that the header of the command (i.e. 0xBC for the MoveWord command, 0xBF for the TRI1 triangle command, etc.) are the same than the F3DEX microcode.

As an interesting consequence, it means that actually none of the N64 microcodes were ever written from scratch by 3rd party developers but only by SGI or by Nintendo. However it is true that only around 20% of the code is somehow related to F3DEX, meaning that this latter was used as a workable environment to develop the new commands filled with plenty of unique features.

A. DMEM address is directly integrated into the graphic command

DMEM is a small 4kb memory which the RSP microcode uses to store the data retrieved from RDRAM. The data is used by the RSP to do the computations according to the specification of a command.

Let’s take a simple example:
0xBC command is a MoveWord command, which simply store a 32 bits words in DMEM. As you may be aware of, moved words will be used later by other commands as parameters.

B. Geometry mode is a mere RSP register

In F3DEX the size of the command is fixed to two mere 32 bits words with the same exact purpose. In Indy/Naboo, the size of a command can be much larger. For instance the biggest ever immediate command of the microcode, which is used to generate the terrain polygons from a height map, is composed of 16 32 bits words!!!!

The very same immediate command may have its size varying according to a flag within such a command. For instance the TRI command 0xB4 for textured polygons is larger than the one for shaded polygons
.
TEXTURED TRIANGLES

Sometimes the same command may have completely different purpose. For instance command 0x05 can be used to generate texture rectangles, generate particles, generate terrain from a height map, generate specific vertex. Except for generating graphics, there is nothing in common between those immediate commands actually.

II/ Listing of the commands with high level explanation

Even if we were able to decipher the microcode, it does not mean that all parameters of those commands were fully apprehended. Some, of course, are quite obvious but some are used in very large and complex commands and therefore abstruse.

The main purpose of this immediate command is to retrieve data from RDRAM and potentially use such data to compute new data.
The structure of the command is the following:

0x01 Header of the command
O Option of the command: for the same DDD, the option can lead to other part of code
DDD DMEM address where the data will be stored. ALSO the code will check it and depending on it, will route the code to a specific portion of code, which will then route again by O.
LL number of bytes to be retrieve from memory
BB it is a mere byte which can be used according to the route the command will take after having retrieving the data (i.e. For the number of lights)
AAAAAA When is not zero, data is retrieved from this RDRAM memory, when there is only 0x000000, data is retrieved from a segment.

Therefore the very same command 0x01 can be used for numerous scenarios, such as:

When O is 0, the command is as the F3DEX command MoveMem, meaning that it simple retrieve data from RDRAM and store them in DMEM.

When O is 1, the command is like the F3DEX VTX command, meaning that vertices are retrieved from RDRAM to DMEM, transformed and then stored into a buffer.

When O is 2, lighting calculations performed. The command retrieves data from RDRAM and computes colors for vertices. The colors are stored into a buffer from where the triangle commands retrieve them later. The lighting system is very complex, with many options.

When O is 3, the command sets the number of light and potentially retrieves the light structure.

When O is 5, the command retrieve vertices from RDRAM in a specific way to DMEM, transformed them and then stored them into a buffer. Such an option concerns 2D graphic where triangles are used.

This command generates primitives in various way (from a mere texture rectangle to particles to triangles used for field, etc.). The last byte of the second word determines command’s mode.

This sub-command transforms selected vertices by Modelview matrix (0x010E403F) and store them into a vertex buffer.

The sub-command generates vertices and some flags used by another 0x05 sub-command.

The sub-command generates a mere texture rectangle using a vertex as center of such a rectangle. It is mainly used for explosions.

Both sub-commands generate the triangles for the ground in Star Wars Episode I: Battle for Naboo (up to 32 per sub-commands). It seems to be generated from a colored height map.
As you understand, command 0x05 is a set of 8 sub-commands!

This command is the same than gSPDisplayList command in F3DEX.

This command is the same than gSPBranchList command in F3DEX.

It is similar to the TRI2 command in F3DEX, except that texture coordinates and indices in the colors buffer provided as command’s parameters.

This command triggers a “jump” to another display list previously set as the first word of the current display list.

This command is the same than gSPClearCeometryMode command in F3DEX.

This command is the same than gsSPSetGeometryMode command in F3DEX.

This command is similar to gSPSetOtherMode command in F3DEX (lower half)

This command is similar to gSPSetOtherMode command in F3DEX (higher half)

This command is similar to the Moveword command in F3DEX.

Only used in Battle of Naboo. It sets the OtherModes for the triangles used by the commands generating the ground.

Only used in Battle of Naboo. It sets the OtherModes (along with immediate command 0xBD) and texture coordinates for each triangle generating the ground. In conjunction with parameters set by sub-commands 0x05 -0x09 and 0x0C, it can also generate such triangles (up to 32 of them).

It is similar to the TRI1 command in F3DEX, except that texture coordinates and indices in the colors buffer provided as command’s parameters.

With such an advanced microcode it is clear that not a lot of N64 games can compete graphically with Indiana Jones and Star Wars Episode I: Battle for Naboo.
As pictures speak louder than words, here some stunning examples of the outstanding graphic exploit.

The lighting is absolutely splendid in Indiana Jones and the Infernal Machine.
For instance at the start of level named Volcano, 12 lights are used at the same time!! 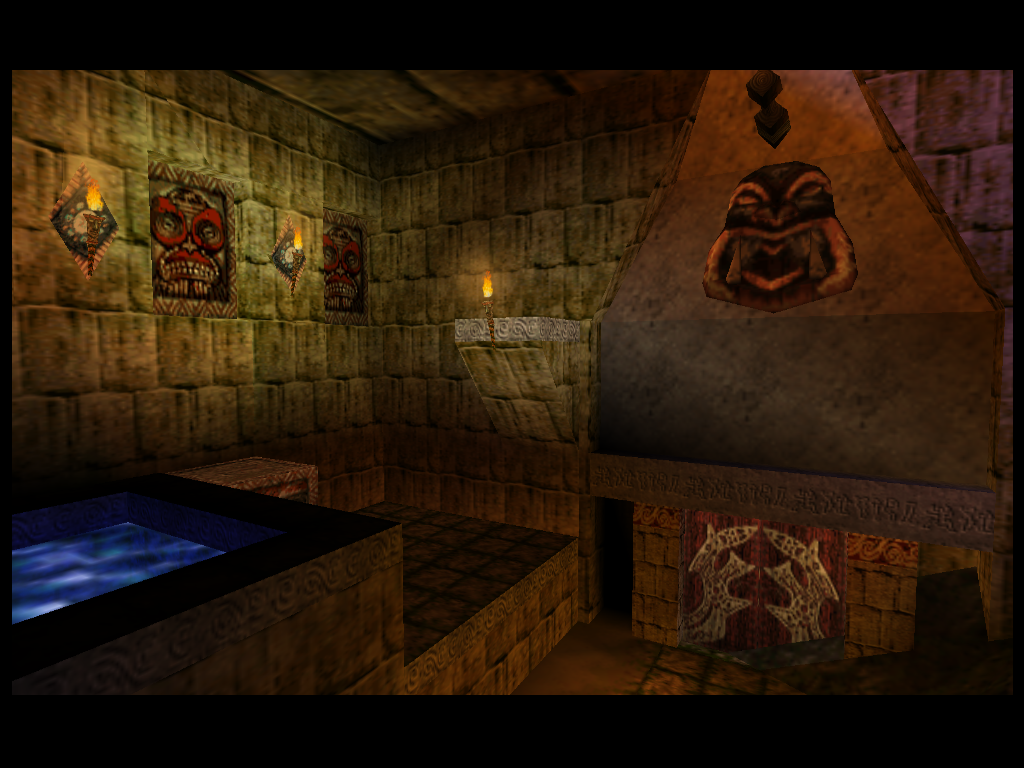 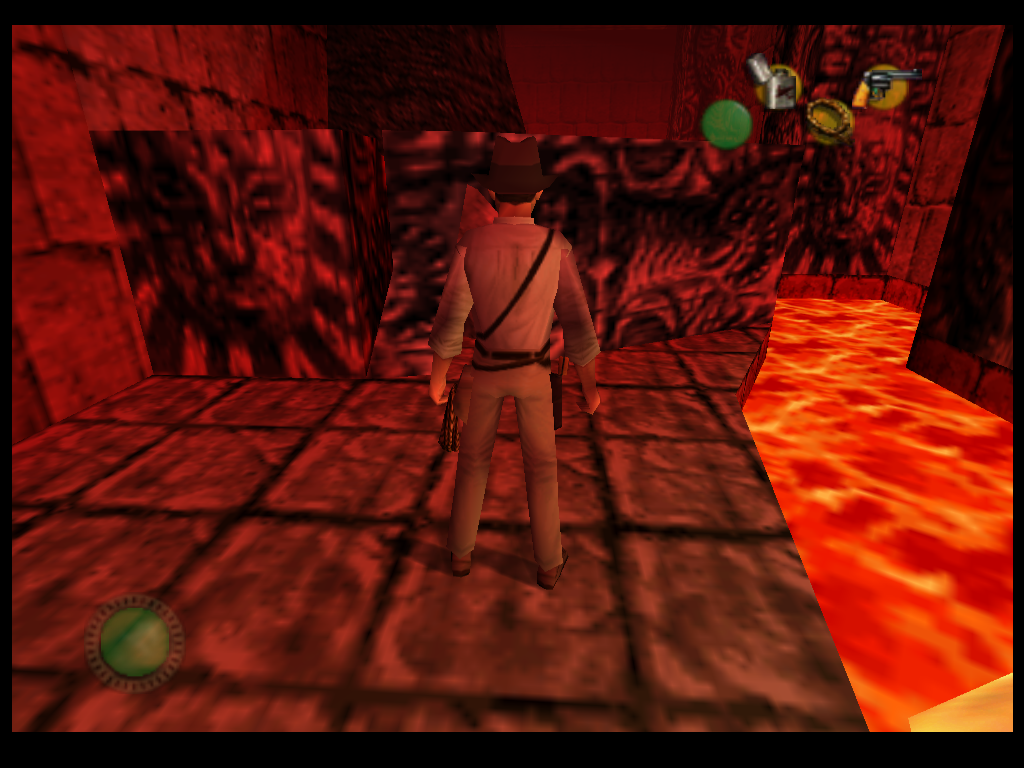 Particles are used in many places without any slowdown in both Indiana Jones and the Infernal Machine and Star Wars Episode I: Battle for Naboo. One example, between many, would be the snow. 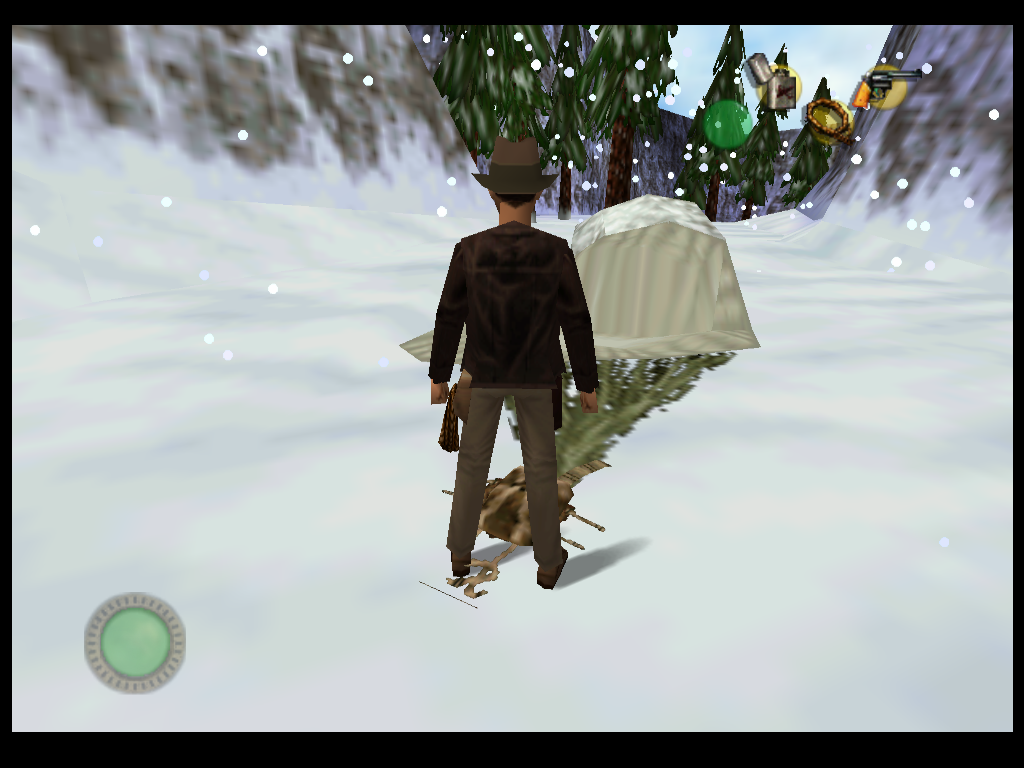 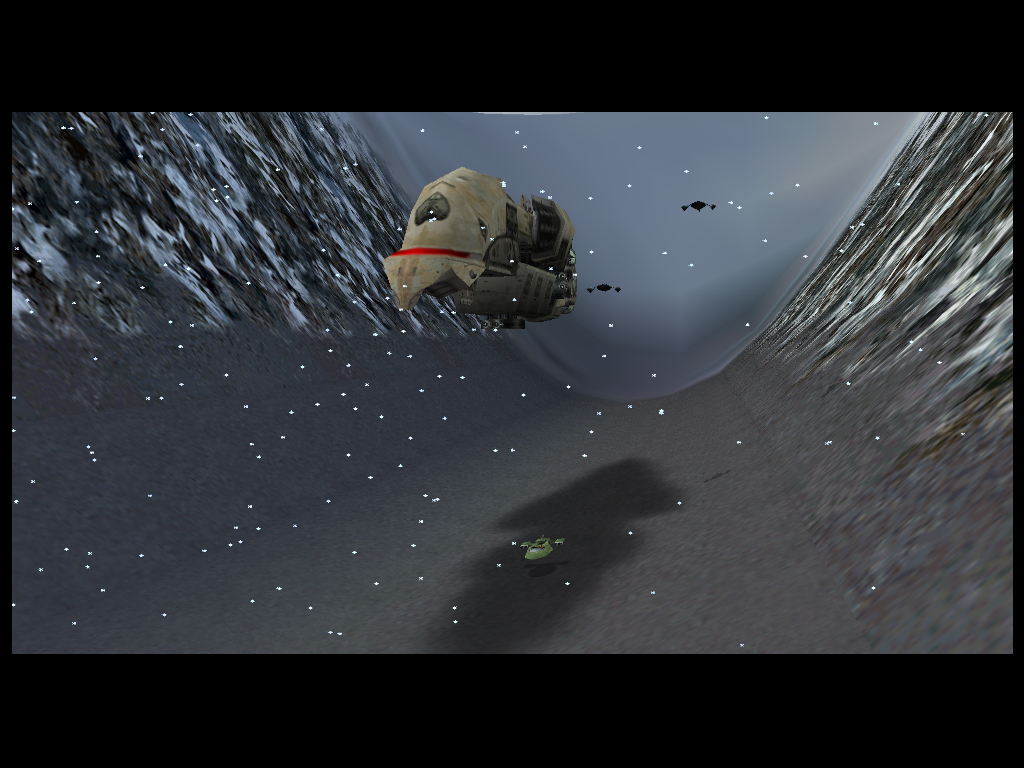 The terrain in Star Wars Episode I: Battle for Naboo is huge and without any fog. 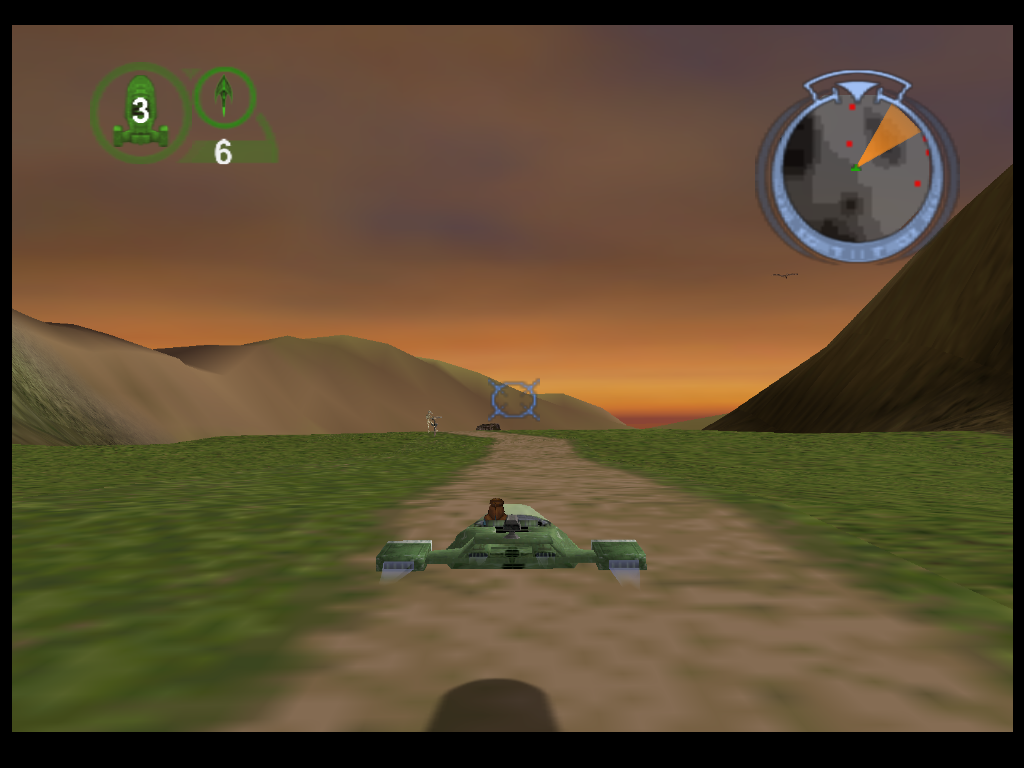 Some great explosions effects are often shown in Star Wars Episode I: Battle for Naboo. 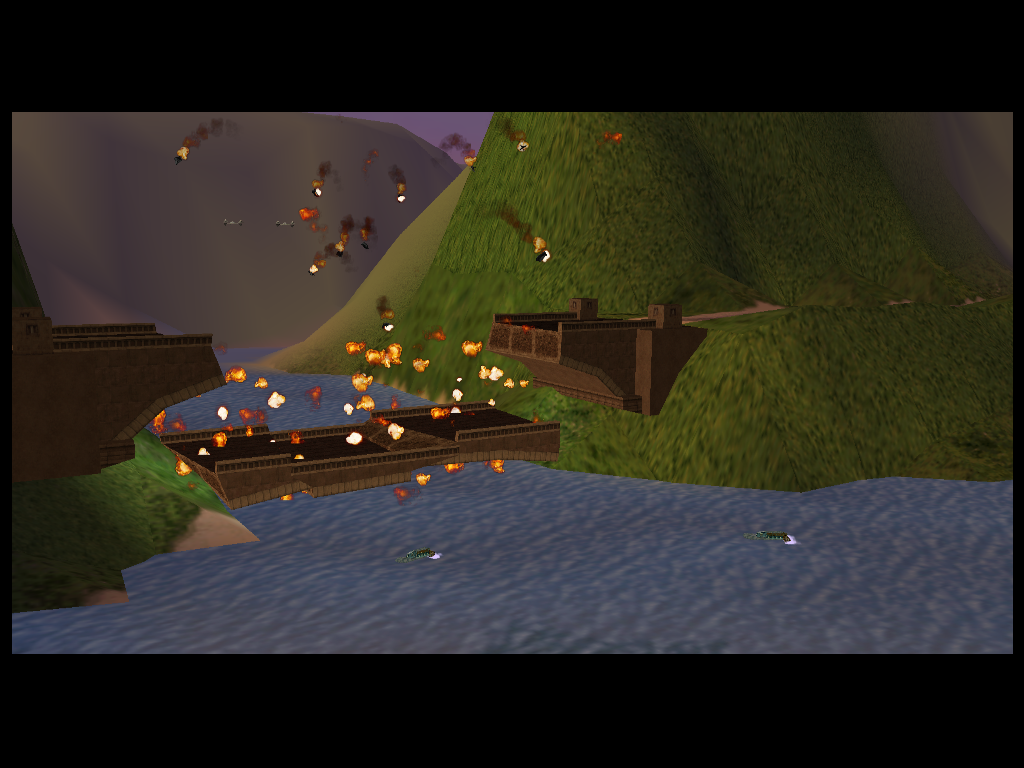 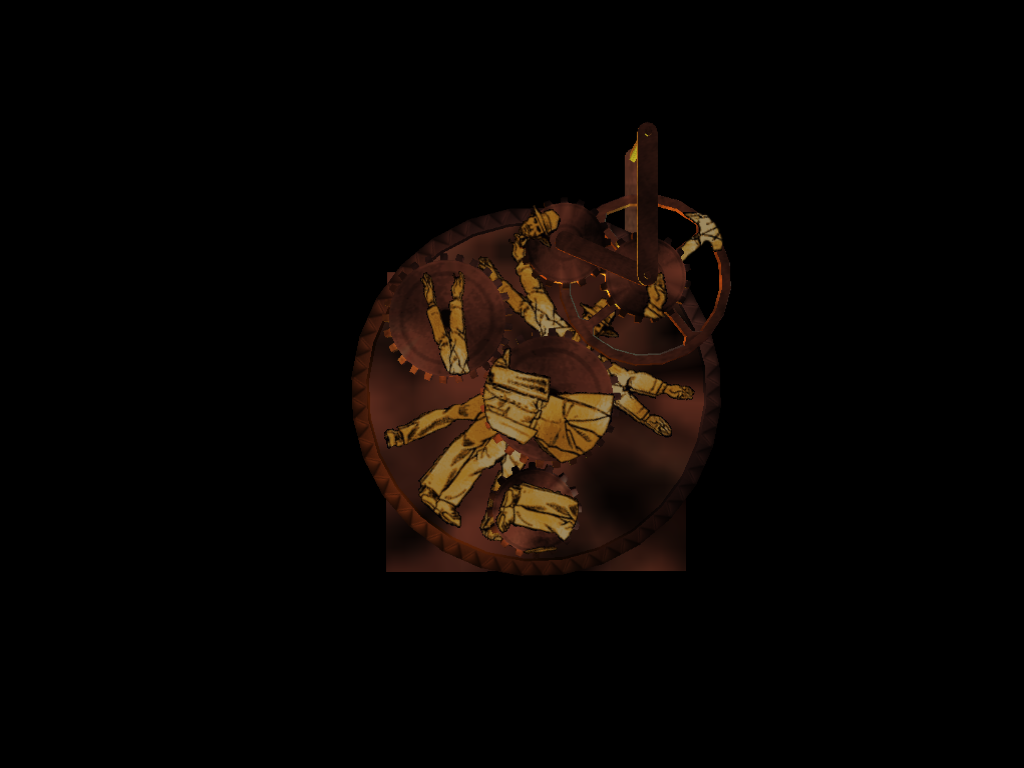 As you may see, both games are simply amazing for a Nintendo 64. Having in mind that the games uses as well the Musyx audio microcode, the console has most likely shown with them the best of what it could offer. As well it proves that skilled programmers can overcome limitation of a machine far beyond expectations!!!
Publié par Olivieryuyu à 04:36